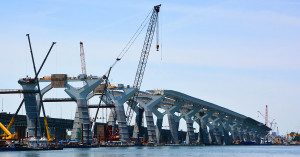 NEW AFRICA DAILY NEWS, Freetown, Sierra Leone- President of the Republic of Sierra Leone Dr. Julius Maada Bio has told the investors’ conference on the tender process for the proposed Lungi Bridge that infrastructural investments should not burden the country with huge debt.

“We believe infrastructural investment…should be financed in a way that the public and future generations are not liable for that debt. So we are not going to build a bridge or an airport for which the people of Sierra Leone are going to pay back a high-interest loan for 10, 20, or 30 years. That simply does not make economic sense,” he said.

The president over emphasized that, each infrastructures investment must be capable to pay for itself in 10 to 20 years based on the financing model that was used, adding that each project must also worth the cost of constructing and maintaining it over its lifespan. Precisely, he noted each investments should be affordable and must be funded without recourse to publicly guaranteed debts.

“We also believe that infrastructural investments must be purposeful. They must unlock tangible economic growth and improve the quality of life of the citizens. In the construction and maintenance phases, there must be real job opportunities and skills training and transfer with implications for real incomes for local Sierra Leoneans. We will insist on that for every infrastructural investment” he said.

President Bio also intimated the public that, his government has prioritized infrastructural investment decisions by asking critical questions about feasibility, sustainability, selectivity and weather it could lead to the development of other sectors of the economy like tourism and travel, mining, construction and small scale manufacturing.

He urged that, the tender process must be competitive, transparent, corruption free, and must offer the best value for money, adding that his government would strongly warn against bribery, kickbacks, red tape, and other working transactions and practices around infrastructural investment.

“I have therefore directed the office of presidential infrastructure initiatives to be particularly attentive to all the foregoing critical elements in launching the tender process for the Lungi bridge. I will closely superintend the entire process and ensure that every tender is compliant and every tender is in the best long-term interest of Sierra Leone and Sierra Leoneans,” he said.

Engineer Dr. John Edward Tambi-Chairman of Presidential Infrastructure Initiatives said, for 58 years Sierra Leoneans had endured the challenges of crossing over to Lungi from Freetown through which lives had been lost, business destroyed and economic activities stunted. He said during these years, governments had come and gone with promises to construct a bridge crossing to Lungi but nothing happened.

“Today we all witness a great milestone under the leadership of President Julius Maada Bio. The New Direction Government has taken the bold and audacious task to build the bridge across Lungi. This is not a small project and we believe with God we can achieve it. I thank you all for your presence because it is a vote of confidence to the New Direction,” he said.

Lungi, which is home to the only infrastructural airport that serves Sierra Leone is a small coastal town in Port Loko District in the North West Province of the country that is separated from the capital Freetown by a sea of about 10 nautical miles.

Most Peaceful Country in Africa- Ghana is 4th