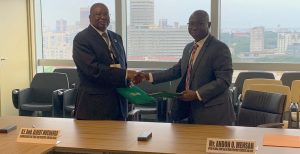 The bank pronounced in a remark that, the grant approved by the group’s board of directors on April 1, 2019 constituted part of a series of interviews by the bank in its lead role to expedite implementation of the free trade agreement, seen as a major force for integrating the 55 – nation continent and transforming its economy.

AU’s Commissioner for Tr5ade and Industry – Albert Muchanga initiated for the continental body, and Obed Andoh Mensah, representing the bank’s Director of Industrial and Trade Development Department signed on behalf of the bank, signaling the start up of implementation, the statement said.

“The AfCFTA is going to work and we are confident that by the 1st of July next year, all the 55 countries would have signed and ratified the agreement and intra – African trade will start’” Muchanga said and urged countries to use this period to complete the parliamentary process.

Muchanga applauded the bank’s vehement and persistent support to ensure smooth implementation of the agreement saying the grant would be used sagaciously for the rollout of various protocols relating to the structure and mandate of the AfCFTA Secretariat.

The trade agreement is expected to unfold intra – African trade up to $ 35 billion per year, ease movement of goods, services and people across the continents borders and out imports by $ 10 billion, while boosting agricultural and industrial exports by 7% and 5% respectively.

However, the AfDB is hosting a group of Chinese investors in Nigeria with the possibility of them to invest in Nigeria in order to gain interest from other African countries agricultural space.

The AfDB has arranged for the Chinese investors to also meet some Nigeria local investors and top government officials like the Vice President and the Chief of Staff to the President, some State Governors and relevant government agencies.

He said the bank has a pipeline of $ 16 billion projects over 2019-2023 and will leverage significant co-financing bank $ 6.3 billion and co-financing $9.2 billion. Out of those funds, he said, 26 percent is set for agriculture financing.