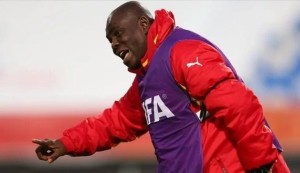 The Ghanaian trainer is making a return to the West African nation for a second stint after handling the Leone Stars between 2015 and 2017.

The 62 year old has loads of experience in the field having guided Ghana to win the under 20 FIFA World Cup in 2019, the only African coach to achieve such a feat for an African nation.

Tetteh also led the Ghana under 20 to the FIFA World Cups in 2013 and 2015 finishing 3rd and round of 16 respectively. Tetteh beats his competitors shortlisted – Goran Stevanoic, Peter Butler, Tahseen Jabbary and John Keister who won the 2019 Sierra Leone Premier League with East End Lions F C.

The Government of Sierra Leone through the Ministry of Sports that pays the wages of national coaches has rejected the appointment of Ghanaian Sellas Tetteh as the head coach of the national team Leone Stars. The Sports Ministry raised an eyebrows about the selection process “did not come to the logical conclusion and was incomplete”.

“After a thorough interview process by the Sierra Leone Football Association Head Coach Requirement Committee and based on scores earned by the various candidates, the Executive Committee of the FA furnished the public about the appointment of Sellas Tetteh as the head coach of the national senior team, “the SLFA noted in a statement.

The erstwhile Rwandan coach is currently in Freetown and is expected to commence work on Thursday the 15th August, 2019. Sellas Tetteh will lock horns with Liberia in Monrovia in the 2022 World Cup preliminary round 1st leg qualifier on 4 March. The match will serve as a rebirth to international football after the suspension of Sierra Leone was lifted on the 3rd of June 2019.

Mr.Tetteh’s appointment shows four years after he was given a job as a coach on a temporary basis. He manned five official games, winning two against Sudan and Chad, losing one to Chad and drew their 2017 Nations Cup home and away qualifying matches with Ivory Coast.

South Africa and Tanzania: Acquiesce to Boost Cooperation in Trade

Ghana: To Invest into Yam Production

Reserve Bank of Zimbabwe: Initiated Gold Coins to be Sold to the Public in a bid to Repress Uncontrolled Inflation

Travel and Tourism Industry in Nigeria: To Grow Exponentially Over the Next Decade, Report