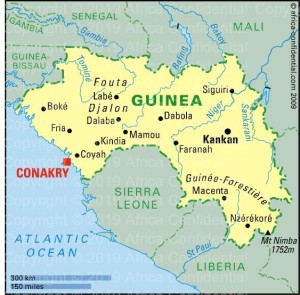 On Thursday, High Power Exploration-a private US Company administering by Mr. Friedland. He noted, it has retained greenlight from Conakry to buy the 95% interest in Nimba owned by BHP, Newmont Mining and France’s Orano.

“I am delighted that HPX will work with the Government and people of Guinea to bring the Nimba deposit into production and to help His Excellency President Conde’ realize his longstanding vision of seeing Guinea become a world-class producer of iron ore,” said HPX President Eric Finlayson.

Nimba, located in the south-east of Guinea, is estimated to hold around $1 billion tones of the steelmaking ingredient.

HPX said, plans are under ways to bring a starter mine of 1m to 5m tones into production as soon as possible with a view to increase output to at least 20m tones.

Under the deal, the government of Guinea will be handed a 15% stake in socie’te’ des Mines de Fer de Guine’e, the entity that owns Nimba.

BHP, Goldcorp and Orano will receive payment for their stakes once the mines is up and mining, people with knowledge of the deal said.

Southern Africa Council of Ministers Slated to Convene: August 13th 2020 for the Fortieth SADC Symposium of Heads of States and Government

$200 Million Expended: By the United Bank for Africa in a way to Subsidize the Crude Oil Sale to Strengthen Investment Growth and Liquidity Statutes

Sierra Leone: Scours Advancement about the Overture of Domestic Commercial Flights in the West Africa Nation

$12 Billion: To be Earmark by the Extractive Sector for Women Inclusion in Zimbabwe Government Prodded

Southern Africa Council of Ministers Slated to Convene: August 13th 2020 for the Fortieth SADC Symposium of Heads of States and Government