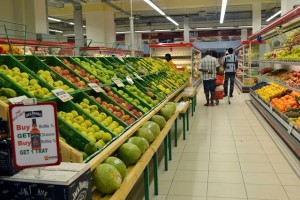 One of the shops in Accra Mall
Photo Credit: NEW AFRICA BUSINESS NEWS

NEW AFRICA DAILY NEWS- A SURVEY of Made in Ghana goods sold in Ghana’s leading supermarkets has shown that only 18% of goods in 23 product categories surveyed are locally produced.

The survey focused on twenty-three (23) main product categories chosen based on a preliminary baseline survey that identified product areas in the supermarkets with MIG goods on display.

The research by international advisory firm Konfidants, is the first in a series of Africa-wide surveys to monitor local content in big supermarkets across the continent.

The findings from the research confirm a common observation: There are not enough Made-In-Ghana goods in the stores. A total number of 7462 brands (from the 23 product categories) were counted across all 8 supermarkets included in the survey. Out of this number, 6, 108 (82%) were foreign brands, with only 1354 (18%) being MIG brands.

The findings however reveal interesting insights into how MIG goods perform across the 23 categories. The best performing category of MIG goods is Eggs (with 91% of all eggs on sale produced in Ghana), followed by Bottled water (with 56% MIG).

The worst performing categories are jointly Rice and Cosmetics/beauty products with 6% each of products sold in this category being MIG. Other poor performers are Confectionaries & biscuits, Beverage powder & Tea and Sanitary Products – categories which all recorded less than 10% MIG across the supermarkets.

On the contrary, apart from Eggs where MIG has a 91% dominance of shelf-space, all remaining 14 categories of local food products have less than 50% MIG shelf space. (Water which was not counted as a food product is the only other product category over 50%).

This is best illustrated by the Cooking oils category. 100% of all palm oil is MIG; but when it comes to bleached palm oil where more rigorous processing is required, only 6% (one brand) is MIG.

There is however clear potential for processed MIG food products to gain more shelf-space in segments like Grains & Cereals where “Tombrown”, Corn flour and very small proportion of baking flour collectively have 47% MIG shelf space.

The research revealed some disturbing trends: Only 6% of rice on the shelves is locally produced. Only 18% of Fish & Seafood sold is from Ghana; and 63% of meat is imported.

In the Non-Alcoholic Drinks & Juices category, only 13% of brands are MIG. And while about 56% of bottled water sold across all supermarkets are MIG, it is still worrying that, a whopping 44% of water is imported.

One could easily mistake these for Made-in-Ghana. – Conversely, there were also products that – although bearing Made-in-Ghana tag – are at best described as “imported and assembled/packaged” in Ghana. Most of the Sugar and Salt sold in the supermarkets fall in this category.

Even though they have very little local value addition, these products are nonetheless legitimately counted as MIG.

Contrary to widely held beliefs about “cheap imports”, the survey found MIG goods to be generally cheaper than imported goods in majority of product categories. While the price differentials are marginal on average as one would expect in a retail context, MIG goods price advantage is overwhelming across the categories of goods.

In 73% of product categories (selected for price comparison analysis), MIG goods were cheaper than imported goods. This MIG price advantage cuts across both basic and processed goods.

This finding has implications for how to re-think the competitiveness of MIG goods. There is of course more to competitiveness than just price – quality, packaging and brand perception equally matter (variables this survey did not cover). But while foreign brands are superior in terms of packaging, there is strong evidence that the “packaging gap” is beginning to shrink as several MIG goods are catching up with foreign brands in packaging quality. What this means is that (assuming marginal differences in product quality) a significant proportion of MIG goods in the supermarkets could be considered as technically, and arguably, more competitive than most foreign goods – once we factor their “superior pricing” and “catch-up packaging”.

The supermarkets surveyed were ranked using two equally weighted indicators to ascertain their “Made-In-Ghana Friendliness”. The two indictors used were:

Game supermarket emerged top of the ranking, followed by Maxmart and Melcom

All the other supermarkets (Palace, Marina, CityDia, and Koala) have less than 20% of their stock being MIG as shown in Figure 2.

The survey found that two supermarkets – Koala and Palace — have dedicated and well-labelled Made In Ghana stands, likely a response to the FDA-led “Buy-Ghana, Love-Ghana” initiate. While commendable, these dedicated stands are however too small and appear tokenistic.

The findings raise questions. Is the low share and profile of MIG goods in the supermarkets a reflection of low competitiveness of local producers or supermarkets’ preference for stocking foreign goods even where local producers are competitive? Is the phenomenon mostly demand driven (is the dominance of foreign goods a reflection of Ghanaians’ taste and preference for foreign brands) or is it supply driven?

Whatever the main reason, the 18% combined MIG goods across all supermarkets is a challenge — considering that the 23 categories surveyed are products where local producers have a fair amount of “competitive potential” including pricing.

To succeed, government efforts at promoting Made-In-Ghana ought to be targeted especially at products where the country has comparative advantage and local producers have demonstrated capabilities and potential.

The managing partner of Konfidants, Michael Kottoh, notes that: “supermarkets are emerging as the preferred retail channel for the growing middle class, hence their critical role in promoting Made-In-Ghana goods.

He added, “One way to improve local content is to promote targets for increasing the share of Made-in-Ghana in the supermarkets for selected products. This can be done progressively over time through innovative approaches that must be a win-win for both supermarkets and local producers.

Setting targets for increasing MIG in the supermarkets is important because globally, there is a fierce battle for scarce supermarket shelf-space by manufacturers and suppliers who sometimes pay controversial “slotting fees” in order to have their brands displayed.

Increasing the share of MIG goods in supermarkets in Ghana is therefore not bound to happen even if local producers were competitive. There are larger global supply chain forces at work that can sometimes make it inflexible for supermarkets to commit more shelf space for local produce even when they genuinely wish to.

Ultimately local producers will need targeted support from government, regulators like the Ghana Standards Authority and the Food and Drugs Authority; as well as help from the supermarkets (and banks) to support local producers to continuously improve their competitiveness (in quality, standards, pricing and packaging) as well as capacity to bulk supply with consistency and meet steep supplier credit and wholesale pricing expectations of the supermarkets.

This report is the first in a series Africa-wide of surveys by Konfidants to monitor local content in big supermarkets across the continent, and includes upcoming reports for Nigeria and Kenya. Source: Konfidants