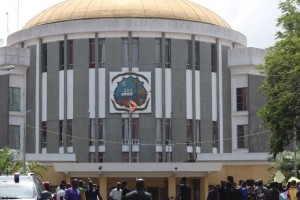 NEW AFRICA DAILY NEWS, Freetown, Sierra Leone-  29th of August, 2019 the Senate Committee on Internal Affairs told plenary that, hundreds of Presidential appointees, local government employees as well as “supplementary employees” have worked for several months without salaries, “because hundreds of them are yet to be placed on government’s payroll”.

The Chairman on the Internal Affairs committee, Senator J. Gbleh-bo Brown – The Chairman on the Internal Affairs Committee said that, 119 Presidential appointees throughout the country are not receiving salaries, though they are working; that 739 local government employees serving in cities, townships, districts and other local government establishments are not receiving salaries while 1,299 persons referred to as ‘supplementary employees are yet to benefit from full employment and salary.

Owing to the seriousness of the issue, Senator Brown said, his committee is recommending that; unless it is absolutely necessary, the Legislature should suspend the establishment of new structures in compliance with the new Local Government Act (LGA); “because the creation of government structures.

“We are recommending also that to accommodate the three categories of people on the payroll, we need to appropriate about US$ 1,460,592.52. What is the implication of us creating structures without fiscal implications.

Senator Nyonblee Karnga-Lawrence, who is member of the Ways, Means and Finance committee and co-chair on Appropriations, asked Senator Morris Saytumah – chair of the Committee to join her to look at the would – be budget to ensure that those people affected are included in the budget and have it passed.

Senator Milton Teahjay recalled that most of the time he and his colleagues take action without taking into consideration the impact it will have subsequently. “Now here we are, every recommendation or nomination that comes to us, it’s “4G”, we confirm. When we are doing something here we need to take into consideration the implications,” he said.

Senator Daniel Naatehn called for a reflection on what the past government did in regard to downsizing, which he recalled made the payroll manageable.

“We have information that the current payroll is around 72,000 employees; we need to investigate if that is true, because the past government left us with 36,000 employees,” he noted.

Sinoe County Senator – Augustine Chea described the non-payment of local government employees as a very serious matter, “but we seem to be apportioning blames where it does not belong.”

Senator Chea continued: “Everything we doing here is nothing, but a showmanship to impress the people in the gallery and out there that we are working. No we are not; the people who crafted these bills for the creation of those municipalities, how many of them have gone to the current budget hearing hearings to make proposal for the inclusion of those affected on the budget?

None, zero. We come here on the floor and make noise, we are not serious; let us get down to business by doing the work”.

Senator Peter Coleman, who spoke before proffering the motion, described it as very unfortunate to have “almost 2,000 of our people that were appointed, commissioned and are not on payroll; it a violation of human rights of these people; definitely if others were commissioned and are working and being paid, they too need to be pay; at the budget hearing we are talking about US$35 million to pay domestic arrears. You mean we cannot find US$1.4 million to put these people on payroll? If we are going to find US$35 million to take care of domestic arrears, we must find US$1.4 million to take care of the domestic human rights’ violation we condoning.”

Coleman’s motion reads: “Why on my feet and taking cue from all what have been said, I moved that the plenary of the Senate instruct the committee on Ways, Means, Finance and Budget, especially at the time when the budget’s debate is ongoing, that something be done in this budget to include these people on payroll.”