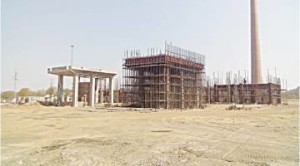 NEW AFRICA DAILY NEWS, Freetown, Sierra Leone- Zimbabwe Zinghxon Electrical Energy (ZZEE) has commenced construction of a 150MW thermal power station in Hwange that is set to push from behind power generation and induce economic growth in the region.

The company, which is a daring journey between Zimbabwe and China, is prior runs a cooking plant in the district. The project began in February 2019 and is to be completed in three years time.

Managing Director – Jun Wen Wang said, the project was being rolled out in two phases with the first stage involving the construction of a 2x25MW thermal power station, while the second 2x50MW unit will be added later.

“We came here to develop Zimbabwe’s electricity economy. Six years ago this company came to Zimbabwe to invest and we have started operations”.

“What we are constructing is a 2x25MW thermal power station. After that, looking at the company’s future, we are planning to build, in the second phase, another 2x50MW unit,” said .

“However, we are trying our best to finish it within two years instead. The foundation for the two boilers, which now in the fourth month, is almost done.”

He said once construction of the power station was complete, 300,000 tons of coal will be required to run the plant and this will be supplied by Hwange Colliery Company and Makomo Resources.

“At 50MW we will require 300,000t per month and will engage Makomo and Hwange Colliery to supply us.

“We are already working with the two mining companies who are currently supplying us at our cooking plant. Also this project will employ 160 people, most of them being locals.”

Wang said, they had since expanded their cooking plant at one of their companies in Lukosi with production of coke having increased significantly. “This year we expanded our coke plant and at the same time we built another coke plant in Hwange district.

“The second plant is already running that is why we have increased the raw materials to about 12000t per month to run both plants but the suppliers are not meeting our required targets,” he said.

“We are getting our local from Makomo and HCCL but they are not meeting the required target of what we want.”

Zimbabwe Zinghon Cooking Company (ZZCC) exports 80% of its coke to the Democratic Republic of Conge (DRC) while Zambia gets 10%.

Botswana and the other neighboring countries share the remaining 10%. According to the company, plans are at an advanced stage to build another chrome smelting plant and also resume construction of their suspended cement plant in Masvingo.

During a recent tour or coal mining companies, Mines and Mining Development Minister Winston Chitando said, government would support the project as it was one of the key investments in the sector.